SEVHAGE author, Dul Johnson has clinched the 2017 Association of Nigerian Authors’ Prize for Prose 2017 with his remarkable novel, Across the Gulf. The award which is one of the most prestigious literary prizes in Nigeria was announced on the 28th of October, 2017. This comes four years after Dul was shortlisted for the Drama version of the prize in 2014 with his Melancholia (SEVHAGE, 2014).

The novel, Across The Gulf, is the tale of Ofala, who on the eve of their wedding has to say goodbye to his fiancée, Ifunanya to join the Biafran side at the war front. Later, while running from the aerial bombardment that ushers the war to their town, Ifunanya is injured and rescued by Captain Janbut Rinbut, a medical officer with the Federal Troops who looks like her fiancée, Ofala…and that is only the beginning of the story. The novel is a tale of loyalty, resilience, nationhood, love and tradition bridging two generations and an entire nation that will leave readers amazed and engrossed.

Professor Dul Johnson is a prolific writer and filmmaker who writers across the genres. Among other publications, he is the author of two collections of short stories, Shadows and Ashes and Why Women Won’t Make it to Heaven; a play, Melancholia (SEVHAGE, 2014) and a novel, Deeper into the Night (SEVHAGE, 2014). Dul is also a seasoned scholar and academic who has taught at the University of Jos, Jos; the National Film Institute, Jos; the Television College, Jos; Nasarawa State University, Keffi and Bingham University, Karu.

Click here for a full story of the Association of Nigerian Authors Prize list 2017. You can order for Across The Gulf by sending a mail to sevhage@gmail.com.

For a detailed review of the 2017 Literary Prizes Shortlist, check here. 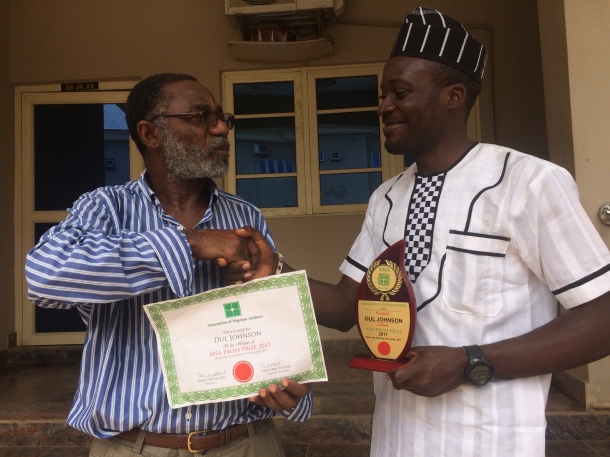